Listening notes of Pirueta record weight by Dalby Audio Designs at Divin Lab of Audio Exotics on March 20, 2020 when the world was taken hostage by a pandemic.

I always admire the talent of Sir Winston Churchill eloquently mobilising the English language at will to inspire millions at times of difficulty. Our world is now in trouble.   Physical connectivity is broken. Isolation is encouraged. Social distance is a new normal.  But our mind is free and spirit is alive. The perseverance of Lee inspires me to share with fellow AE followers of almost 10,000 worldwide, about the magnificent “Pirueta” to the service of music which is a crucial part of humanity.

The pending arrival of the “Pirueta” created a celebratory expectation on my part. Even though I had seen a few images prior, I wasn’t prepared for an instant astonishment.  The Pirueta is simply an art, but not the artificial type for typical commerce. The orange leather pouch and the walnut presentation box exemplify tremendous attention to details. Blending art and science in harmony to achieve perfection of a specific functional goal is rare.

For those discerning souls that follow every step of mine in Divin Lab shall triumph the excitement and joy.  Extraordinary is a norm here.  However, I reckon many would not be on the same page as they don’t know me as a person and have never been to Divin Lab.  Trust me, and I shall try to convey my feelings faithfully as much as I can.

The scent (from the East African Ebony) of the “Pirueta” drove me spontaneously to pick “The Central Park Concert of Simon and Garfunkel” album released in 1982.  The epic song - “Bridge Over Troubled Water” came to mind. I began spinning it on the Da Vinci EQ analog deck, in partnership with Fuuga 風雅 cartridge mounted on the latest Tosca Arm by Joel Durand. An Argento FMR phono ground cable was connected between the arm board and the Zanden 1200 signature phono stage (Columbia curve, reverse phase, Westrex cutting machine). The entire system is always connected to the Troy ELITE NG by Tripoint Audio. I began listening with the Dalby Constellation Record weight introduced in 2017.

It was flawless as though I was teleported back to Central Park in New York in September 1981. The system is resolute to display the balmy tonality of the vintage Yamaha CP6 piano championed by a great pianist, Richard Tee, displaying powerful emotions from the very beginning all the way to the crescendo of the 3rd verse. He fed off his pianistic strength onto the vocal strength of Art Garfunkel.  I could easily comprehend how Art formed his vowel shape.  What a phenomenal feat!  The overall musical arrangement rendered a gospel atmosphere.  I was engulfed by an ocean of people in Divin Lab, sharing the same space with them.   I was touched when the song was faithfully finished.  I am proud of this system.

I didn’t know what to expect from the “Pirueta” because of excellence achieved in all known parameters verified by Alan SIrcom of Hi Fi Plus, Roy Gregory of Audiobeat, and Stirling Trayle of Audio Systems Optimized. I listened to the same song again with the Pirueta.  Once the Fuuga needle fell on the grove, I was drawn into Paradiso in the next 4 minutes 38 seconds. I could visualize Art was standing there with his hands in his pockets. The tenderness and smoothness of Art’s voice were demonstrated in some lyrical lines at the beginning for instance - “when tears in your eyes, I will dry them all.........”. Art elongated the word “all” in a whisper mode with a soft punctuation, before naturally transiting next to “I’m on your side, oh, when times get rough. And friends just can’t be found”.  I was held captive by his melodious voice.

His composure remained calm despite the technical difficulty of this song in front of half a million people.  The communicative power of Paul Simon’s lyricism offers hope and radiates compassion via the vocalism of Art in a hallowed manner. Art was almost wailing out towards the end and yet hitting all those high notes flawlessly. That was phenomenal because everything was straight to the microphone, with every nuance and mistake, naked to the whole world.  I had goosebumps chilling up and down my body all through. I wasn’t aware a thin mist was quietly developing around my eyes until the last 30 seconds.

I sat on the Chieftain Chair in awe without any motivation to do a comparison with the Constellation record weight.   I knew the presence of my ego in the absence of Pirueta in the first audition. The 2nd session did not shock me.  Instead it was spiritual, sentimental, and graceful. I was touched by the fullest extent.

I do not want to amplify the contributing share of the Pirueta to the overall emotional experience because it is an accumulative effort of every single item working in unison. That said, I wasn’t prepared for what it had accomplished.  The Pirueta delivers unspoken tranquility in the first verse and exuberant vitality at crescendo.

I would like to express my earnest gratitude once more to Lee Dalby who had gone so deep into the research of a record weight - the Pirueta.  Lee Dalby is a maestro in this subject, period. 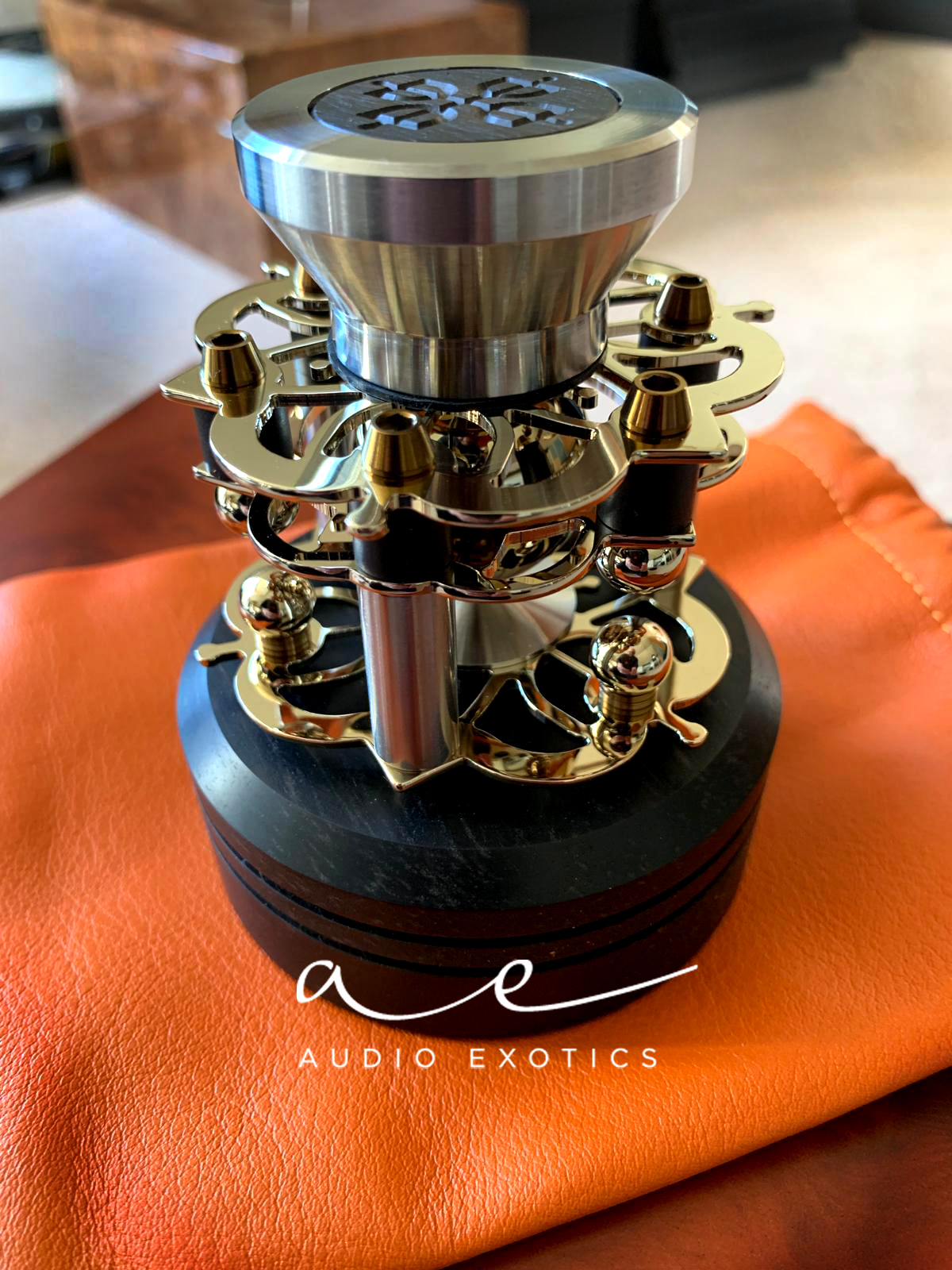