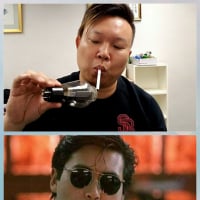 The award goes to “CASSPH” in 2011. Based on PT’s assessment over the past year, his system performance has leapfrogged straight to the “super hi end” region. Most importantly, Cassph is a frequent concert attendee chasing the stardom of Berlin Philharmonic and other alike in the league overseas. He is very sensitive to the tonality of French horn and pointed a few times to PT that the tonality of this instrument reproduced at AE1 was not ideal because it is far from what he experienced at real concert hall. We had taken his observation seriously in August and PT had tried hard ever since to fix the bug. It is a case to illustrate that we are also learning from our customers constantly.

His music preferences are not restricted to classical music only. He always likes Canton-Pop Music. This has also inspired PT to start playing canton-pop CDs via the Tidal mega system. This is unusual for PT as he has long taken a view (bias) that recording quality of canton-pop is subpar. But cassph has seemingly changed his view on this by playing a song called 漩渦 - a duet by 彭玲 (Cass Pang) and 黄耀明 whenever he tests new gears including the Vekian OPUS suite and the latest cost-no-object Artemis amplifiers by Analog Domain. It is a song with very complicated electronic music at the background with very interesting rhythm. The vocalism of Cass Pang is undeniably great. PT has subsequently chased back all the recordings by Cass Pang and his favorite of the favorite now is her mandarin song 困鳥 recorded long time ago. He even goes as deep as comparing the version sung by GEM 鄧梓琪 versus Cass Pang for a period of two weeks. It is not an easy task to change PT’s mindset. But you did. He always brings some canton pop CDs to test some mega systems now.

A good system should be able to play ALL kind of music well. Cassph’s diverse musical interest alongside his live concert experiences have driven him to build a system that is primarily neutral without precluding rich tonality when the voice/instrument calls for it. Of course, his system has always room for improvement but we also understand that a living room environment has plenty tangible and intangible constraints. Still, Cassph’s system performs very well despite the acoustics development limitations.

With a state of the art Trinity phono in the chain running true and full balance operation through the Robert’s Takumi K10 and Angel’s Artemis, his vinyl setup produces big dynamic swings alongside a well structured sound-staging. Micro details are all present without being highlighted. The overall stability of the imaging is rock solid without being dead. With a supreme audio infrastructure, he has decided to go further into the uncharted area. He will also be the first owner of Joel Durand’s masterpiece tone-arm TELOS in Asia in Feb 2012.

It is a pleasure for me to present AE’s best audiophile award to CASSPH in 2011. We shall present a prize to you later.